The filmmaker can never see the film as others see it. – for the filmmaker the film is an extract from all the footage shot for it and a reminder of all the events that produced it. It reduces the experience onto a very small canvas. For the spectator, by contrast, the film is not small but large. It opens onto a wider landscape.

So keep on checking this page!

Soon, the film Armenian Echoes, produced and directed by Hagop Goudsouzian, will be released. It retraces his seven month journey through Armenia in pursuit of his dream; the search for the soul of Armenian music, or as he states; ”the very essence of Armenian cultural identity”.

As an old woman says in the film; ”that is our national identity. If we do not collect our folk arts, our music songs, dances, poetry, ballads, epics, literary and artistic works, then we are cutting our roots. We would no longer know our identity. It is through these art forms that we can know who we are.”

Also, when asked about his hopes for the future, an old man in the village replies that Armenians need to protect their culture and language. He said it in such a beautiful way that he deserves to be quoted: ”Our culture is our strength. We have nothing. We have no wealth. Our wealth is our culture.”

To watch the trailer:

To celebrate the 20th anniversary of the independence of Armenia in August last year, the Minister of Arts Hasmik Poghosyan signed a decree rewarding the German singer Vardeni Davidian, the pianist and composer Armine Ghuloyan, and finally the saxophonist Koryun Asatryan with golden medals for contributing in an important manner in the development and preaching of the Armenian culture worldwide.

It was the Extraordinary and Plenipotentiary Ambassador of the Republic of Armenia Armen Martirosyan who gave the awards during the ceremony which took place at the end of October at the Armenian embassy in Germany.

During his speech, the Ambassador Martirosyan emphasised the role of diasporan Armenian musicians in presenting the music to non-Armenians. The President of the German-Armenians Central Council Azat Ordukhanyan also made a speech arguing that on top of that, the most important is for these musicians to present this music to the Armenian diasporan kids who otherwise would not come that much into contact with this type of music. It stresses the role of music as a tool to preserve identity with at the same time allowing it to develop…

Here’s the link to a very informative article written by Joane Nagel and published in the journal Social Problems about the construction of ethnicity, which regards identity and culture as its two basic building blocks.

Some interesting bits and pieces of an interview with Antranig Kzirian, the Oud player, that summarise well what I think about (Armenian) identity and music (which also confirms what my research has demonstrated..)

H: Where did you get the inspiration to pursue your field?

A.K.: The Armenian oud tradition of the Eastern United States strongly motivated me to explore and study the oud and the role Armenians played historically in mastering it.  Growing up I also incorporated various influences into my understanding of music and performing on the instrument.  I believe that traditions must be kept alive but also developed and grown so that they remain a living, breathing part of our perception of art and life.

A.K.: Both – we must preserve but also help it evolve and survive in its surroundings.  Adding our own experiences and seasoning helps to keep identity fresh and current while still maintaining core values that we hold dear as Armenians and people of good conscience.

To read the full interview:

To listen to him playing the Oud:

And finally to read an interesting article written by the Professor Melissa Bilal:

The Oud: Armenian Music as a Means of Identity Preservation, Construction and Formation in Armenian American Diaspora Communities of the Eastern United States 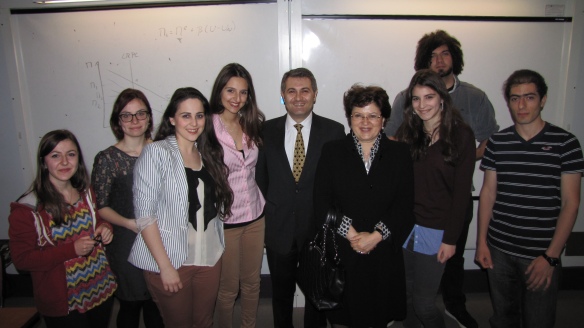 Thank you all for coming yesterday. The event we had in commemoration of the 97th anniversary of the Armenian Genocide was a success! For those of you who weren’t there, I am proud to say that the speech given by the Ambassador has been recorded! I won’t post it here however, so if you’re interested, please ask for it. We also have made a little apparition in Armenian newspapers! Here’s the link to one of them:

the Ambassador’s visit to Kent on the News!

As for the German award-winning documentary made by the filmmaker Eric Friedler that we screened; ”Aghet: Nation Murder”, it is possible to watch the entire video on YouTube:

”Duduk is not only a musical instrument; duduk is soul and sense…
Duduk is a collective symphony that comes from melodic modulation of sentiments.” Aram Khatchatryan

”Duduk has got its own inner nature. Today it gives the opportunity to the world to gain an insight into the spirit of our nation. This very small musical instrument creates greatest wonders.” Edward Mirzoyan

The duduk is an emblem of Armenian identity. Musicologists have done a lot of research about the instrument’s history and have found evidence of its use as early as 1200 BC. The ethnomusicologist Dr. Jonathan McCollum described the duduk as: ”the only truly Armenian instrument that’s survived through history. The most important quality of the duduk is its ability to express the language dialectic and mood of the Armenian language, which is often the most challenging quality to a duduk player.”

In recent times, the duduk has been made popular through its uses in various film soundtracks, such as in ”The last Temptation of Christ”, ”Blood Diamond”, ”The Chronicles of Narnia”, or ”Gladiator” and so on. Here you can listen to one of the songs played by Djivan Gasparyan in Gladiator for example:

In 2005, UNESCO proclaimed the Armenian duduk music as a “Masterpiece of the Intangible Heritage of Humanity.”

A very good website to have some more information about the musical instrument: http://www.armenian-duduk-music.com/index.php?page=1

(DJ Funky East (in my video) also uses the sounds of the duduk in his music.)

As you will soon see, one of the guys in my documentary, Fares, likes to play the Armenian national anthem but in a non-traditional way. He has almost reinvented it by adding his own personal twist which in this case is rock and blues. This idea came to him when he was much younger when he first watched the video clip of Jimi Hendrix recreating the American national anthem in his own way during woodstock. It created in Fares a desire to almost emulate him but in relation to his own culture, thus the Armenian culture.

I personally think it is very interesting to see how you can take certain aspects of your life and incorporate them into your own culture (even when it is very ‘traditional’), which in turn leads to the creation of something new but at the same time not at all unrelated. So it’s almost like a reinvention of traditions on a personal level, and not so limited to the personal if you share them with a crowd. This really shows how cultures are far from static.

Here is the ‘original’ version of the national anthem you can listen to:

I just came back from uni and I can proudly say that the work is almost done! A couple more days to go and the video will be up on vimeo and posted on this blog… After having experienced so many technical issues, and also other issues on the field, and after so many train journeys back and forth to London, it feels sooo good to see that all the troubles I went through were actually WORTH going through! I really learned a lot during the whole process, not only about filming but also about people. Isn’t this what anthropology is all about anyway? 🙂 And certainly why I love it so much!